Using Dump and Restore to migrate FreeBSD to ESX server

I’ve a number of  legacy machines which need virtualising with Vmware Vsphere5. Mainly they are old servers running software and websites that cannot be ported to modern OS’s and hardware. I thought to get the ball rolling, I’d migrate our old Cacti server in. The process will be done in a few stages;

Create a new VM in Vsphere

I’m using Vmware Vcenter with my ‘head’ servers, but you can do this with the Vsphere client just as well. Select the size of disk needed – i checked to see if i could reduce the overhead with a ‘df -h’ on the source server. Add the FreeBSD 9.0 CD and ensure its connected when the VM is powered on.

Boot into the LiveCD

Let the installed run until you get a blue screen inviting you to create a LiveCD or carry on with an install. Choose LiveCD, and login as root. there is no password at this point, and as the OS is on a read only disk (ie the CD) it can’t be changed – yet. Before we go much further we need to increase the size of the /tmp partition which by default is very small and is a RAM disk. To do this we’ll drop the mount and create a larger RAM disk:

Setup the server for SSH

Firstly, to enable us to contact the server as root we need to make the /etc partition writable. This is done with:

Now add a root password with the passwd command. Next we’ll add some IP address information. On the vsphere5 freebsd install the driver is the em0 driver, so:

No we can ssh to the vm and stop all the annoying typing at the console.

This can be done in one of 2 methods; the complicated way and the easy way. I chose the easy way which is to use sysinstall. 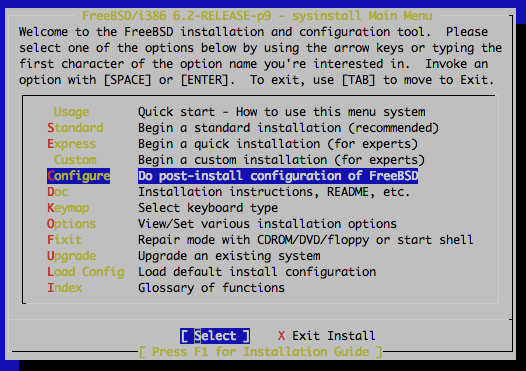 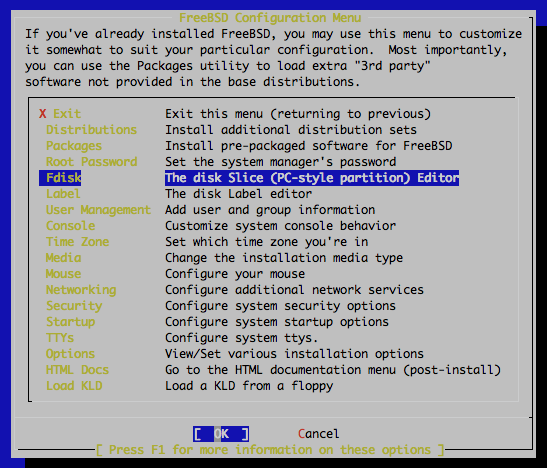 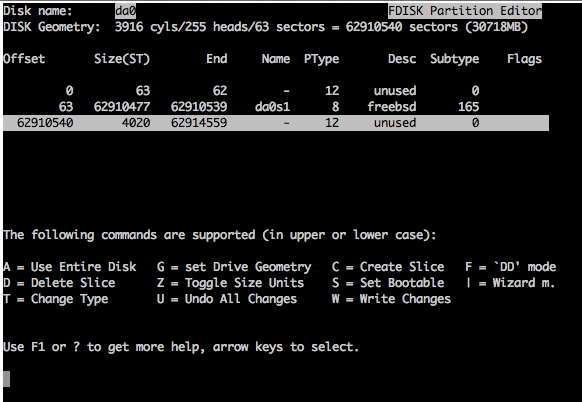 Were using the whole disk (press A) and the ‘W’ to write, then the boot manager screen follows: 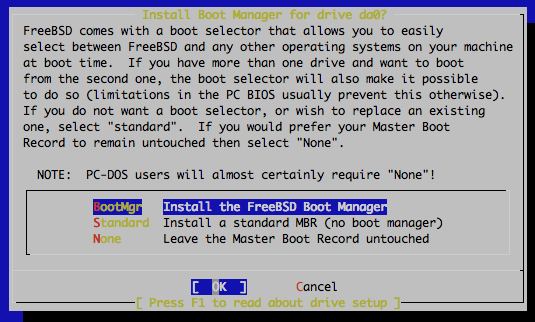 Then back to the config menu to select ‘Label’: 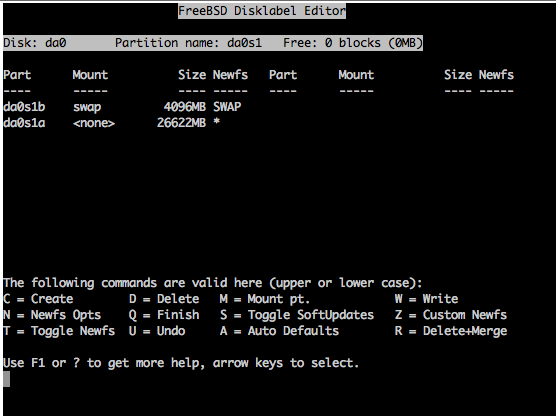 First create the swap partition (4G for this server) with ‘C’, the ‘4G’ then ‘Swap’. After that press ‘C’ again and accept the rest of the disk, select ‘File system’ and make the mount point ‘/’ (root). At this point arrow down to highlight the root partition and change the mount point using the ‘M’ to ‘/mnt’. Now we are ready to go to the source server…

Dump and Restore via an SSH tunnel

Assuming there are 3 partitions that are needed (/, /var, /usr) them we need to do 3 of these:

There are a few things to note here on the dump command:

We need to modify the ‘/etc/fstab’ file to ensure the device names are correct and the number of partitions is correct. In my example i’ve moved from a multi partition setup with separate /var, /usr etc to a single root partition. My old fstab looked like this:

which I modified (on the VM so its ‘/mnt/etc/fstab’) to this:

In addition, the network cards will probably have different device names, but in my case they both used ’em0′, however if you need to change them, edit ‘/mnt/etc/rc.conf’

The MySQL instance would not start on my VM, but i found this was because the /tmp volume had incorrect permissions. I change this with: